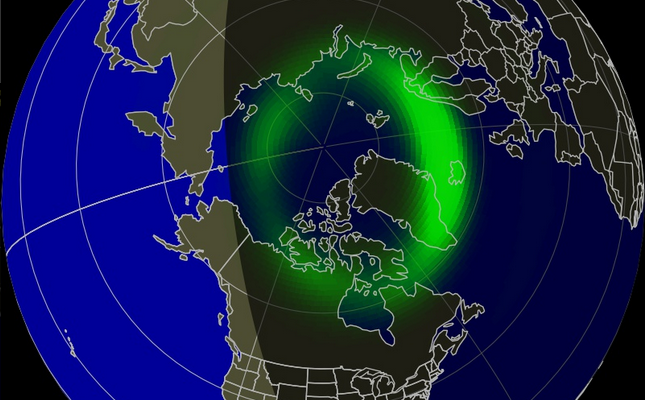 Iceland is a country apart: glaciers, volcanoes, geysers, polar night, midnight sun… and northern lights. Like the other countries close to the Arctic Circle, Iceland is a place where you can see the Northern Lights.

Iceland is one of the best places in the world to see the Northern Lights. Iceland at 65° N on the southern edge of the Arctic Circle, you can see auroras almost every night (and at temperatures not as cold as other viewing locations in Scandinavia often).

From September to the end of March the Northern Lights are visible and many points far from the lights of the cities allow to see this polar phenomenon.

The capital of Iceland is a medium-sized city and as soon as you leave it far from the artificial light the sky lights up with green during the winter season. The hot baths like the blue lagoon are exceptional opportunities to enjoy the northern sky. Whether you are a lover or a family member, this is an incredible way to be in the middle of winter in an outdoor hot tub under a sky lit up with green and pink.

A honeymoon in Iceland is the dream of many couples.

A short drive southwest of Höfn is the glacial lagoon of Jökulsárlón, where icebergs from the Breiðamerkurjökull glacier drift out to sea. It is a classic place to photograph the Northern Lights.

all over Iceland during winter !!!

When to see Northern Lights in Iceland ?

The best time to see the aurora borealis in Iceland is from late September to late March. The conditions must be met to witness the phenomenon: intense solar activity, dark night, clear sky, far from city lights.

The capital of Iceland is also exposed to these lights but it is useful to move away from the center.

Iceland being a sparsely populated island and globally wild, it is easy to get away from the artificial lights of the cities.

The best chance to experience an auroral storm is during solar maximum, when the sun is at the most active point of its 11-year cycle. The next solar maximum, however, will not occur until about 2024. Although auroras are more common during solar maximum, they can actually occur at any time – and they are more common than many people realize. If you’re in Iceland and point your camera north on a clear, dark day, your photo will almost always capture a pale green aurora. And it can quickly become a solar storm for a few moments.

As in all polar zones, there are applications and sites measuring auroral activity that allow you to predict the appearance of the aurora borealis in Iceland. The applications indicate the KP index which allows to know, coupled with the weather, the chance to see the sky light up with green during the northern night.

Iceland is a land of ice and fire, a rendezvous for lovers looking for an original honeymoon under the sky lit up with green, pink and blue. To be in love under a sky illuminated with northern lights is an incredible memory and beautiful images for a honeymoon in winter. The honeymoon in Iceland can be a winter trip under the sign of the aurora, or a summer trip under the midnight sun. Going from France to see the Northern Lights in Iceland can be an extended weekend.

From Iceland to Greenland

Iceland is the European starting point to go to Greenland to see the northern lights, in the bay of Disko for example.

This website uses cookies to improve your experience while you navigate through the website. Out of these, the cookies that are categorized as necessary are stored on your browser as they are essential for the working of basic functionalities of the website. We also use third-party cookies that help us analyze and understand how you use this website. These cookies will be stored in your browser only with your consent. You also have the option to opt-out of these cookies. But opting out of some of these cookies may affect your browsing experience.
SAVE & ACCEPT