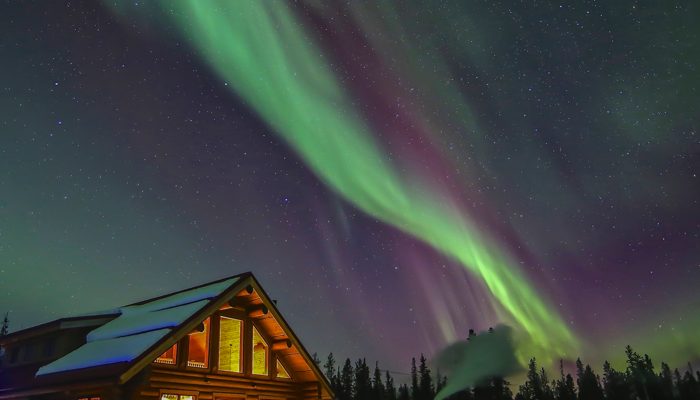 Where to see the Northern Lights in Canada?

From September to mid-April, the aurora borealis hovers in the sky over the Yukon Territory in Canada. Depending on cloud conditions, light pollution and auroral activity at night, you could spend hours watching the neon shades of green and yellow.

Another perfect place to see the Northern Lights in Canada would be the Northwest Territories, where its capital, Yellowknife, is one of the most famous places to enjoy this phenomenon. There are also many hotels and activity centers related to the Northern Lights at this destination.

In the remote and arctic territory of Nunavut, the aurora can also be seen in its capital, Iqaluit, on Baffin Island. It is perhaps one of the coldest, most remote and uninhabited places in North America to experience the Northern Lights in winter.

Also located at a high latitude, the town of Churchill in northern Manitoba is another Northern Lights destination.

To maximize our chances of seeing the Northern Lights in Quebec, we should head to the northern regions of the province, such as Kuujjuaq.

In the northern regions of Canada such as the Yukon or the Arctic territories, the best time to see the aurora is from September to the end of March. During the summer months, the night sky is not dark enough to see the Northern Lights, even when the solar wind activity is strong. In mid-winter, temperatures can drop to minus 40 degrees and it is important to wear appropriate winter clothing to enjoy the displays. Canadian winters are very cold, so for a honeymoon you need to bring more than your wedding dress and evening wear!

As in Alaska or Europe, websites and applications offer forecasts of aurora and intensity of the aurora. If these forecasts are not long term forecasts, they allow to know at 3 days or for the same day the intensity of the phenomenon and the probability to see an aurora in different areas of northern Canada. Auroral forecasts are issued from stations where the aurora can be seen on a daily basis and for several days. Some cities where auroras can be seen that have forecasts:

Forecasts to discover directly on the site https://astronomynorth.com/

Quebec is not the most exposed area to the aurora borealis during winter, but it is possible to observe them. It is therefore necessary to use aurora and weather forecasts to maximize your chances of seeing the light dancing in the sky. Due to its location, Quebec allows to see auroras in winter about 3 to 5 times a month, very rarely more. But the places far from the cities and artificial lights are magnificent and put in situation the light of the sky in an exceptional way. Their rarity makes them even more exceptional.

The Government of Canada proposes a weather and auroral forecast site for Quebec https://www.spaceweather.gc.ca/forecast-prevision/long/sflt-1-fr.php

This website uses cookies to improve your experience while you navigate through the website. Out of these, the cookies that are categorized as necessary are stored on your browser as they are essential for the working of basic functionalities of the website. We also use third-party cookies that help us analyze and understand how you use this website. These cookies will be stored in your browser only with your consent. You also have the option to opt-out of these cookies. But opting out of some of these cookies may affect your browsing experience.
SAVE & ACCEPT